Certain coding patterns have emerged in the game’s codebase, many of them influenced by my time spent writing web and client applications. I know some “experts” will get up in arms about how games are different and shouldn’t be written like other types of apps but I tend to disregard philosophical arguments in favor of pragmatism. On a related note, in this reddit thread a couple of people commented on a previous post on using a messaging system in Unity, mentioning it could suffer from performance problem. I must explain: I am not advocating that the patterns I’m using are either the best way, or even the only way to do things in the same code base. Indeed I only use the messenger/mediator pattern where the dependencies are very loose and there isn’t high traffic communication. Additionally I think some of these patterns lend themselves more to the type of game I’m making: turn-based, heavy on events / UI and light on real-time mechanics. With that, let’s have a look at the solution structure: 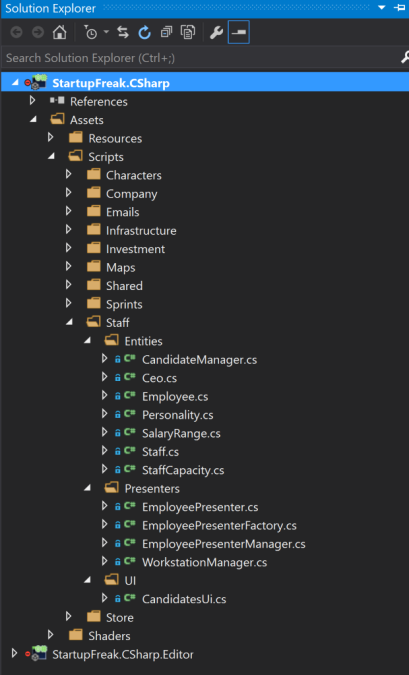 The sub folders are based on features. I have come find this a more logical and discoverable structure in larger projects, compared to folders that are broken up by type. For example if you have ever worked with ASP.NET MVC you’ll note that by default Controllers, Views, and Models are 3 separate top-level folders. This is fine initially but once you have tens of controllers, it’s a lot nicer to group all related files (controller, view and model) into the same “feature” folder.

The second thing to note is the sub folders and files. The core game logic lives in classes in the Entities folder. These are pure C# classes (i.e. not overriding MonoBehaviour) which do not interact with the Unity engine. There may be texture names as strings or Vector3s for holding the position of an entity, but there is no direct interaction with Unity classes, renderers, UI, etc. Advantages of this approach are:

The presenters then, are MonoBehaviours that present one or more entities and can be associated with a prefab. They do all things presentation related (e.g. loading prefabs, positioning game objects, dealing with materials, UI click event handlers, etc). They do not hold any game state, but may contain presentation state (e.g. current animation frame). I use Zenject to inject the entity into the presenter at the time of creation.

Note that the entities are completely unaware of their presenters (like any typical MVC / MVVM implementation). Instead the presenters “watch” the model state and respond accordingly. Here are a couple of ways this can happen:

Finally I have a UI folder which honestly could be folded into Presenters. It was initially there for bits of UI that strictly support a Canvas with UI events, such as the main menu.

Well, yes and no. The goal here is still separating game from presentation logic. But unlike MVC and MVVM there are no controllers present here, nor any two-way data binding. I don’t think those constructs really make sense for a game (except maybe for UI. There are some Unity assets available for that very purpose).

And the weekly update?

This week has been a little less productive than usual, but I did manage to finish a first draft of the investment mini-game. The company valuation equation is super simplistic and the counter offer systems doesn’t yet have much variety in terms of investor personality, but I think it’s at a state that is playable and ready for feedback.