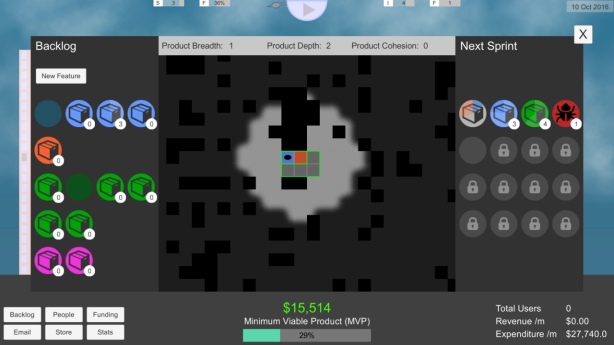 Super late with this post but I still want to get the weekly updates going. Here is a short recap of what’s been cooking in the past week and a half:

Visual Update of the Backlog

First let’s talk about the screenshot above. I was basically happy with the backlog I had before conceptually, but visually it really wasn’t working. The items in the backlog were too big, and I had to scroll through them. There were a lot of small fonts and some task titles were getting cropped. I have now opted for something that I think works a lot better. You just have the icon for each task (obviously I just have placeholders for now), and a small circle for the level you are at for each task. Feature development tasks don’t have a level and are just removed once completed. Each item also shows a radial progress bar (this might need a bit of tweaking). Clicking and holding an item for a split second will show a panel over the map which gives you a very detailed breakdown of what the task is, how you are progressing with it, and how it impacts the game.

I also added a bunch of polish to it, for example items in the product backlog can be double clicked which makes them jump to the first available slot in the sprint, some animation to smoothly move items back and forth (rather than an abrupt snap-to-slot), etc. This is probably the most core UI in the game so I wanted to get it to a point where it feels good and basically just needs a drop of art and final tweaks.

I did a bunch of work around employees. These include:

The next area that I have identified as lacking is proper stats. I’ll be adding some strategic stats to the existing UI to help with player’s decision making, but I’m also creating a dedicated stats area. I ended up buying this asset from the Unity Asset Store to help with charts and graphs. It’s my first purchase there and I have to say it’s worth every dollar. I know I have saved a silly number of hours.

The journey continues. I still want to get an alpha out at some point…