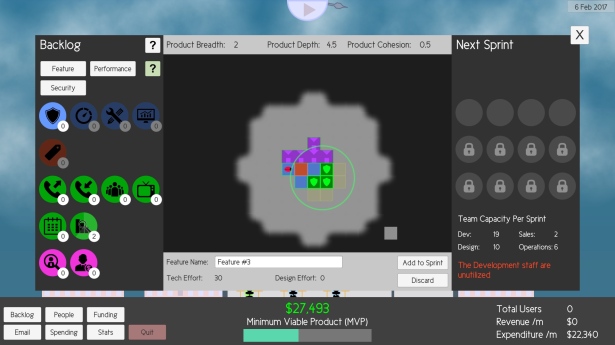 In the past 2 weeks a number of people, mostly friends and colleagues but also some complete strangers, have played the Startup Freak pre-alpha and have given me feedback. This was great in and of itself, but what has absolutely floored me is the length and detail of the feedback. I have had people write entire documents for me, have lengthy chats, and send me exact screenshots of the issues they are running into.

I’m still waiting for a few more, but so far a couple of themes have emerged which have really given me direction. Here they are:

Before I jump into the problems, it’s worthwhile looking at what people liked about the game. I am taking these with a grain of salt, as it’s always hard to judge whether something was really fun or the player just liked the idea of it…

This is the single biggest feedback that I got: it’s not clear what the player is supposed to do. This is specifically an issue in the backlog area. 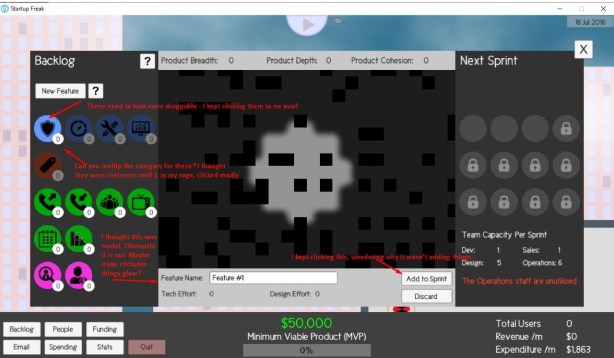 Detailed feedback from one of the play-testers.

Not a single one of the players knew that they can/should be building features for the first few sprints. The tasks themselves are also obscure and just too overwhelming initially. The problem also extended to other areas like the funding mini-game, the spending screens, and employee management. I knew going in that my tutorials are lacking and essentially placeholders, but I didn’t really anticipate the extent of the problem. It’s clear to me that the text-based tutorials simply won’t be enough.

I will need to overhaul the tutorials. Some things to do here:

I’m kind of leaving this ’till later on. I want to minimize waste on tutorials as I’m still tweaking the game-play.

Again I knew going into the pre-alpha that the game doesn’t really scale after a certain point. What I actually found surprising is how far people played the game (much further than I ever pushed the game…which tells you why testing your own software has diminishing returns). As it turns out, the player’s experience goes something like this:

I actually had a friend cause an overflow in the cash offered by an investor.

: I thought about adding the concept of competition. What would be cool is, when visitors come to your site, they also visit other competitors’ sites based on their marketing spending. A portion of them will then trial one or more products. From those trials some will then choose one of the competing products. What this means is that you are not just trying to spend more money on marketing and product building, but you are trying to keep up with and/or beat what your competitors are doing. This should create an interesting challenge through to the late game.

I actually did a bunch of the stat work behind this. But then it dawned on me: building AI, and more specifically good AI, is going to be a massive task. It would just grow the scope of this game way too much. As much as I think it would be great for a game like this, it would simply put the game in the unachievable basket

Re-scale Marketing: An obvious change is the marketing activities. Currently each activity has a fixed conversation rate which scales linearly. In reality there would to diminishing returns on spending. So I’ll be looking to implement “S” curves for the activities, and so you’ll need to try and find a sweet spot for each activity:

Reputation(?): This is an idea I’m still toying with. It has the potential to make the game more obscure but it could also be a good way to create a challenge in the late game. Basically there could be a reputation value which, if left alone, would decrease over time. Various activities such as building bigger features, or hitting certain milestones, would increase this reputation which in turn translates to more customers. However events like a security attack would drop its value rapidly.

Events Revisited: Right now I believe the randomly generated events go mostly unnoticed. Hardly anyone in the alpha group even mentioned them. I think it’s partly because they get buried in your emails and you don’t know they are still going on, partly because they don’t last very long (usually 6-8 sprints). I think I need to make them far fewer, but with a lot more impact so that the player really has to react to them. I also need to throw them in the user’s face.

As I mentioned people generally liked the concept of product building. Some likened it to 4X games. But:

I’m definitely taking this one on board. This is THE feature in the game (no pun intended). It’s unique and I want to really flesh it out.

There are many many other pieces of feedback which I’ll be looking into (e.g. employee UI and interactions). I have a lot of work to do, but I also want to keep the scope reasonable. The next goal will be to incorporate as much of the feedback as I can, do another quick alpha, and then decide whether or not I can justify spending the money on art. Here we go!